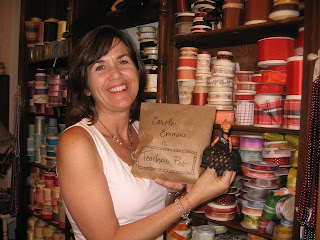 Yes the wonderful Colleen Moody holding a sign "Teacher's Pet" with the Pumpkin Doll I was to learn how to create.

has more wonderful photos of

Colleen and Iva's classes.
DeDe created this one too: 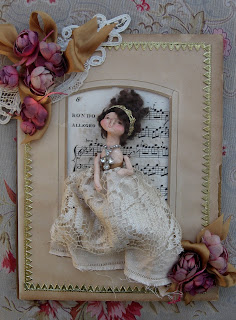 ~~~They are super wonderful~~~ 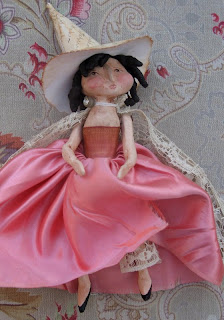 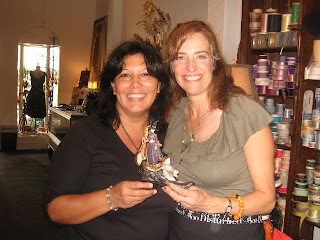 This above photo is of DeDe on the left and Iva on the right.

Enlarge the photo so you can check out the witch's shoe

How wonderful is the shoe made from a vintage chocolate mold?

Imagine the flow in this class!!! WOW!!!

from me lacy, papery confectionery delights were I a modern day magician!!!

I am ever grateful to meet artist's who share their creativity so willingly!!!

The Gilded Lily
in Old Towne Fullerton on Saturday and Sunday the 26th & 27th of September.
Yes, I immediately called DeDe Warren
{she is the class manager and a Dearie!!!}
to book a seat for each day : )
It is a dream come true; not just being in the same room with Colleen but to sit, listen and to her teach her wonderful craft!!!
#1: Colleen Moody is NOT uppity and had a couple of years ago answered an e-mail I sent to her asking a art question; not only did she answer my question but also gave me a hint : ) She is a Master of her craft!!!
Yesterday's class was "The Littlest Witch";
I chose to make a Pumpkin Girl : )
I was immediately dreaming of the vignette she would come home too.
I bought a teeny tiny human cameo for her to wear on her oh so slender neck.
Then I booked a seat for the class today:
"A Vintage Cabinet Card Doll"

I booked these classes one month ago...I like to be ahead of the game.
Wednesday, September 23rd, at approximately 1:30 pm I was driving to get onto the 101 North Freeway to go home and my transmission started slipping. Well, it died on me and I have no car; the transmission would cost more than the car's worth.
So, I cried, called Nancy and e-mailed DeDe about my situation.
They were supportive of me. It will be okay in the future.
I wonder if I will ever be priveleged to meet Colleen? I certainly hope so : )
So, I am home alone : )
My daughter is spending the weekend with a friend so I am going to bake some organic zucchini's and beautiful organic Vindalla onions and a red Bermuda one. 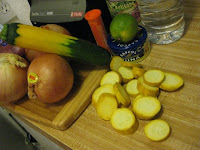 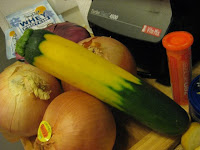 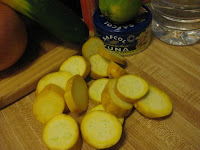 I had to take photographs so you can see the awesome coloring of the organic zucchini; she only shops at Whole Foods Market and is a very healthful female.

I had took this picture of my freshly brewed coffee for Darla : )
since we both drink French pressed coffee. 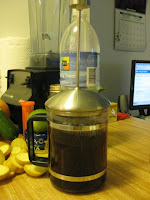 This is pitcher of freshly brewed Lemongrass Green Tea.

I drink my coffee and tea {cold or hot} black. 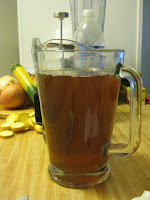 Life is good and I will plan to get up to Northern California
when Colleen gives a class up there one day.
I hope all of you are having a Simply Marvelous Sunday!!!

I am re-posting this (2 years later) as it was a fun filled night of frivolity, sharing, delightful silliness and I truly thought there would be another one each year...I was late in participating because I am really shy and did not have much confidence. It was a ball and I am sad that there has not been another one. EB was the hostest with the mostest. Josie no longer resides with me as she moved in with DeDe Warren. I bet they have lots of fun together : )
Bloglandia Ball
These are the girl's twin escorts!!!
(Yes, Scoundrel is on the right & Rogue is on the left)
They are hot!!!They spoke with EB and she said they could wait outside under the grove of trees. They said okay as they wanted to smoke a good cigar and drink their nightly glass of burgundy amongst fellow revelers. I know they have a lot to share with their friends : ) 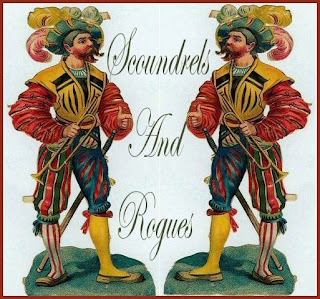 The BLOGLANDIA BALL
is in full swing and I am unable to attend. You see I am very busy attending matters.
I am permitting a couple of my girls to be seen and they are eager to dance, sing, drink (Josie is a bit of a lush and tends to be risque : ) 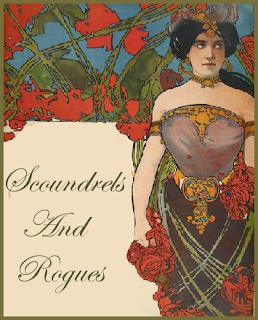 Please say hi to
A Bleu Bow
She is on her way home as Spreckles and she have an early curfew.
Actually she is much older than she appears yet we all know about those secret spa appointments : ) Don't you just love her green wooden wheels on her tricycle? 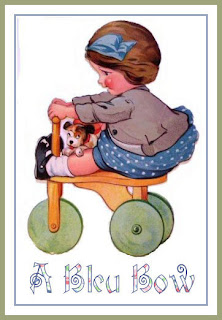 Presenting Josie!!!
Yes, she is born in America yet her alter ego is Josephine Baker and she thinks she is her double. Corey where are you? Josie is looking for you everywhere!!!
Seriously, she thinks because you are both American born you are related : )
Oh Donna, she is in hysteria because she was unable to have you fashion one of your Queenly crowns. In fact, I am , hearing about it several times a day!!! 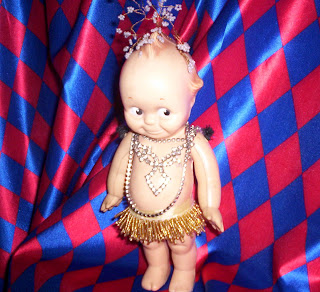 Josie
loves to be photographed
She wanted you to see her vintage rhinestone bustier with a drop medallion. 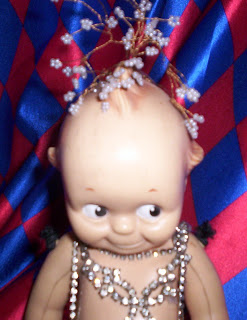 Josie's skirt is an idea Constance gave to me. Actually she was too dress similar to Miss Kili (A Floralina doll purse hand designed & made by Constance) yet she would NOT hold still long enough so all she got was the 5 layers of beaded dangles. 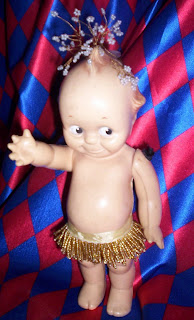 Josie is sending a "shout out" to SugarWings over at Karla's Cottage!!! Josie thinks SugarWings is the most special little person she has ever seen!!!
Okay as you can see Josie has removed her bustier and vintage rhinestones so I think it is time for her to depart EB's Bloglandia Ball before she is entirely nude : )
Well, we will probably never be invited to another Bloglandia Ball : (
Josie has no _____ about herself!!!
Thank you Jamie over at Simply Me Art for the beautiful white satin round bow pin. Josie is complaining still as she wants her ostrich feather fan that she holds while sitting out in Pigalle in Paris, France hoping someone will recognize her as the Josephine Baker : ) She does favor her.
Good night ladies!!!
Posted by a Bohemian Market at 10:57 PM 1 comment:

Lil Malaika at 50 days old in this photo. 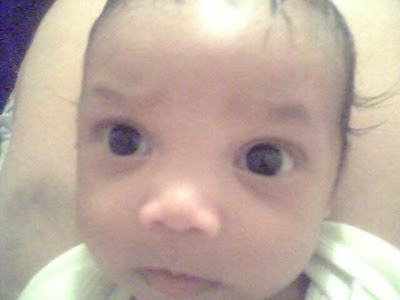 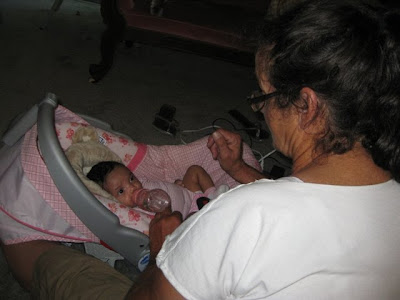 She is letting me hold her water bottle : ) 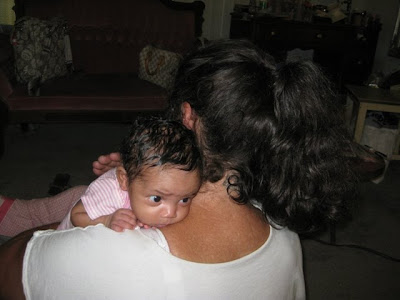 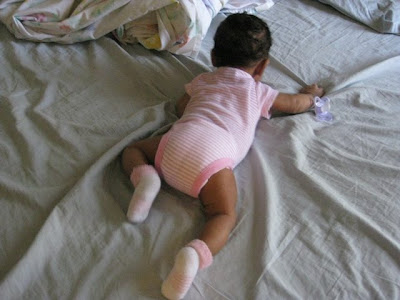 She is making her mad get away. 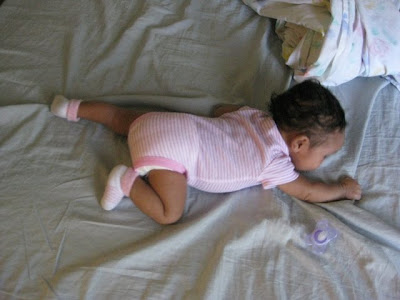 She is a sweetie and yes, I am a typical grandma : )
She sleeps through the night, likes music and is a very joyful and happy little girl.
Her Mommie said it is time to go home.
Big Malaika is rather shy about photos until she looses the baby fat.
Ciao everyone.
Peace
carole
Posted by a Bohemian Market at 2:18 PM 8 comments:

Good Day to Everyone!!!
I am rather well and hoping I can continue to use the computer; weakness of the muscles prohibited me of recent.
I am trying to walk better yet there are still days I cannot leave out the apartment.
Yet, I feel good because the view from the balcony is a canopy of green Ficus leaves; the cutest squirrels play in the branches and if I am real lucky I can spot a Hummingbird flit from tree to tree : )
PLEASE visit my friend's blog {carolannesboutique} as she is having a SUPER Give Away!!!
This is the photo on her profile and I love it!!!

She is one of the most kind, sharing, and generous females I have every met.
I have entered it and I do not know how to scrap : ) It is that nice : )
Okay...I am back and will gladly start visiting all of you WONDERFUL ladies!!!
Peace
carole